The Clongowes Senior Cup team had their first outing against Terenure College in the Bank of Ireland, Leinster Senior Schools Cup at Donnybrook on Wednesday. They prevailed with a 20-point victory following a terrific start from Terenure and an impressive finish by Clongowes.

The Clongowes boy’s determined faces stood out in a sea of purple and white as they took their positions on the Energia Park pitch. The great tradition of hard-fought games, which exist between these two colleges, was evident from the kick-off. Out-Half, David Wilkinson (Rhetoric) was injured in the warm-up but his replacement, Charlie Reilly (Poetry), did an excellent job of starting the game. Terenure seemed to have Clongowes on the run when they converted in the opening 20 minutes – a slick back combination resulted in a well-worked try and conversion for Terenure to lead seven nil. 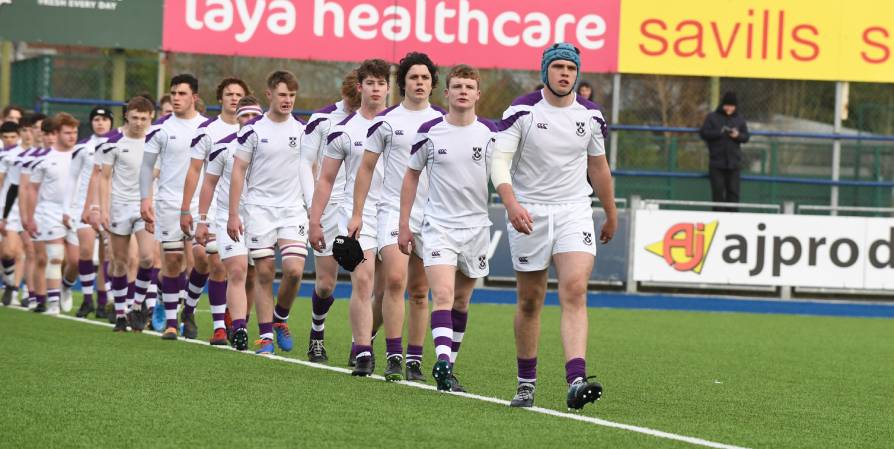 Terenure now changed tactics, and moved to a kicking game, using both wings smartly. They were rewarded with a second try late in the game. Again, Clongowes responded, and some smart passing saw Mulcair, release centre Peter Maher (Rhetoric) for a well-deserved try from the big centre.

In the closing ten minutes, Clongowes brought on replacements all of whom could have started. They slipped into a game plan with ease, the fresh legs were welcomed, and the momentum continued.

Oisín Devitt closed the game out with a well-taken penalty to leave the final score Clongowes 34, Terenure College 14.